Biogas in the public sector: Understand the importance of these initiatives

Biogas in the public sector: Understand the importance of these initiatives

In Brazil, when the use of biogas arises from public sector initiatives, the potential for social transformation and improvements in environmental indicators for a given region are evident. But for this, it is necessary to design more effective public policies, since the use of biogas production potential is still not far from being fully exploited.

In 2019, in the city of Entre Rios do Oeste, the Bioenergy Biogas Plant was inaugurated. The project conceived by an R&D call from the National Electric Energy Agency (ANEEL) changed the lives of residents with the generation of electricity using biogas produced in pig farms in the municipality. The project was sponsored by Copel and executed by CIBiogás and the Itaipu Technological Park (PTI).

Biogas in the public sector: the initiative in the field

Rural properties, seen as the units responsible for producing biogas, are connected to a 20,6-kilometer collection network that transports the biogas to a Thermoelectric Power Plant with 480 kW of installed power with two motor-generator groups. At Minicentral, biogas is transformed into electrical energy, which in turn offsets the energy consumption of public buildings in the municipality.

The city currently has just over 4 inhabitants and still has a lot to offer for the development of biogas in the state. According to the Agricultural Defense Agency of Paraná (ADAPAR), the city has a herd of 155 pigs. The municipality is the 4th largest producer of swine in the state of Paraná and the 16th in Brazil, representing great potential for energy generation from biogas in the interior of the region.

In general, the Entre Rios case represents an exemplary business model to be replicated elsewhere in Brazil, given the satisfaction of residents with the initiative and the great stimulus of the bioeconomy, as the opportunity fosters the need for specialized services and new supplies, such as the demand for skilled labor and industry suppliers.

Currently, the project treats 215 tons of waste that are transformed into 4.600 m³/day of biogas, capable of providing the swine farmers involved with up to 5 thousand reais according to their production and size of property. Electricity generation is 3.000 MWh/year, proving the good example of the case.

The potential of other states

Thus, the effectiveness of studies focused on the viability and intentions of each project can be seen. The Entre Rios case represents a very suitable business model to be replicated in regions with similar pork production potential, and this, in much of Brazil, is found in rural regions, in the interior of the states.

The discussions of the United Nations Climate Conference in Glasgow, Scotland – COP-26, brought to light the importance of targets for the reduction of the ozone layer caused by the emission of greenhouse gases (GHG). The reinforcement of the goals that must be met by Brazil by 2030 confirms the importance of the fight against climate change, since the conference defined the initiatives that would mitigate the maximum increase of 1,5°C in the average temperature of the Earth compared to the period pre-industrial.

Along the same lines, Instituto Amazônia 21 was launched with the intention of supporting projects with the adequacy of sustainable practices and an ESG (Environmental, Social and Governance) approach. The initiative structures projects that have the capacity to generate a positive socio-environmental impact and that include Biogas within its actions as an alternative capable of applying the use of the source in the Legal Amazon region, which has great potential for the development of a bioeconomy focused on agricultural regions and local commerce.

CIBiogás, together with the Federation of Industry of Rondônia (FIERO), launched a study that identified the potential of the state of biogas from the Fraction of Urban Solid Waste, which is 31,7 million Nm³ biogas/year. The number can generate 59 GWh/year of electricity and supply around 19 homes with biogas alone, in addition to being able to generate 16,8 million cubic meters of biomethane.

The study was presented at the launch of Amazônia+21, as well as other research, with the intention of promoting new actions in the socioeconomic development of the region.

Actions like this, not only promote the evolution of biogas in the national territory, but also the confidence of state and municipal governments in the transformation that this source, together with initiatives such as the Amazon+21, can change the sustainable scenario in Brazil, which has been damaged each year due to fires and unsustainable agribusiness.

Biogas promotes a strong link between all the important points for the good progress of Brazil, one of the countries with the greatest potential for biogas production, but which still wastes a lot of waste.

According to the Technical Note, Panorama do Biogás no Brasil 2020, the number of plants in operation between 2019 and 2020 grew by 22% pa, revealing a strong trend towards investments in biogas. The Outlook for the 2021 results is still expected to present even higher numbers. 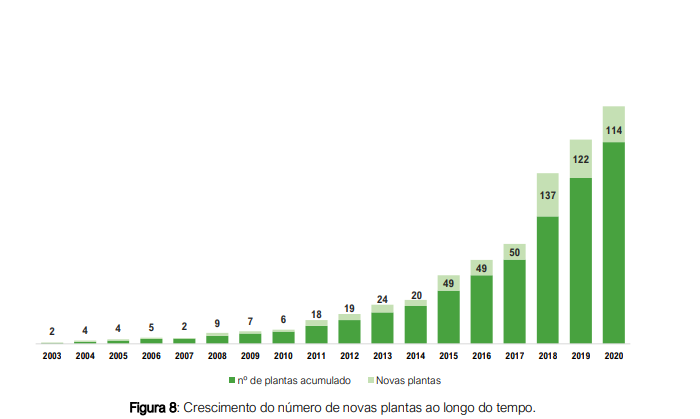 Biogas in the public sector

The Paraná Energia Rural Renovável Program, Renova-PR, was launched in 2020 in Paraná, one of the Brazilian states with the highest agricultural activity. The program supports the distributed generation of electricity from renewable sources of biogas and biomethane generation in rural production units in Paraná, as stated in Lei

At the end of 2021, Governor Ratinho Júnior announced new measures to encourage the generation of renewable energy in the agricultural scope of Paraná, therefore, two decrees were released, one that makes available R$ 1 billion in tax credits for companies and cooperatives that have ICMS credit in Paraná and another that authorizes the subsidy of interest rates for credit borrowers, rural producers and agro-industries in credit lines with own resources of the financial system.

The importance of this initiative, which initially includes actions in agriculture, opens the door to even more activities that recycle urban organic waste so that it can be transformed into biogas. The change literally happens from the inside out, encouraging more investments in public and private contexts and always in favor of biogas and its advantages for society.

In Foz do Iguaçu the horizons have already begun to expand. In the second half of 2020, the A delegation from the Municipality of Foz visited the UD Itaipu to know the work of the Center and the efficiency caused by the application of a biodigestionr in places with a large amount of waste, in order to increase socio-environmental responsibility with a waste management program in the municipality, reinforcing the relevance of biogas in the public sector. 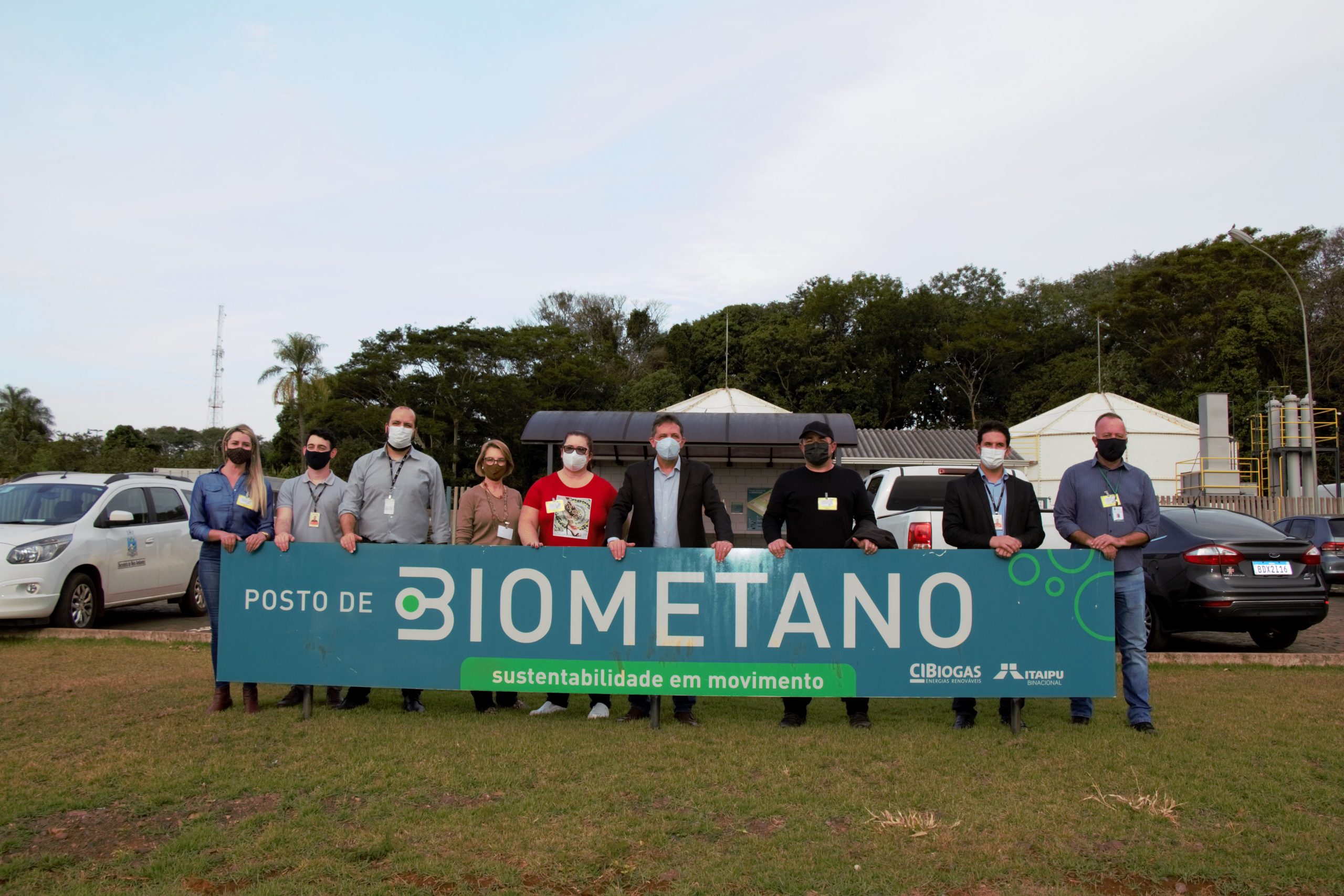 The idea is that domestic-scale biodigesters can be installed in municipal schools., since the machines can accumulate up to 10 kg of waste daily, transforming them into biogas, which is capable of generating gas for the kitchens and also fertilizer for the green areas of schools.

A new perspective for the Foz do Iguaçu landfill

With the opening of proposals for the acquisition of biodigesters for schools, it is believed that, in addition to the reuse of waste for the generation of electric and thermal energy, the mayor Brazilian boy sees the opportunity as a chance to increase the useful life of the landfill, due to the reduction of waste.

According to infographic prepared by the Brazilian Association of Public Cleaning and Special Waste Companies (ABRELPE) and by the Brazilian Biogas Association (ABiogás), in 2018, 91% of all urban solid waste was collected in Brazil, but only 59% of this total was properly destined to landfills to be transformed into biogas. In southern Brazil, the volume of MSW in landfills in 2018 corresponded to more than 5 million tons/year, but only 535 million Nm³/year were captured in the same year. In total, the volume of MSW in Brazilian landfills in 2018 amounted to 42.266.759 tons/year.

Another advantage identified by the leaders and those involved in the initiative was the increase in cooking gas, which consequently becomes an economic factor when generated from biogas, stimulating the city's bioeconomy. The municipality also intends to install biodigesters in the most needy regions, in addition to recovery units for recyclable materials.

In the end, it is understood the importance of hosting biogas in the public sector. The initiatives that permeate the source, whether from institutes or exclusive projects, stimulate curiosity for an alternative so beneficial to society. Domestic scale digesters are capable of transforming the place where they were installed, and in a larger perspective, optimizing the financial vision of a city or business, resulting in a much more conscious and sustainable population, due to attitudes that first emerged from the courage to invest in innovation.